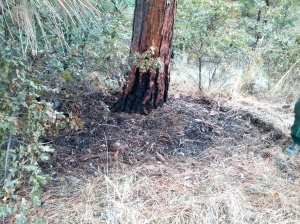 With all the lightning we had during the evening hours of Thursday, September 5, only one confirmed fire started in the Mosier area.

The location is in the Fire District, off State Road about two miles east of town.

As you can see from the photos above, the lightning split the bark on the side of a medium-sized Ponderosa pine, then started a grass fire at the base of the tree, scorching the tree trunk pretty good about three feet off the ground.

Fortunately, the tree is about 100 feet from an occupied house, and the owners had a garden hose on the grass fire right away while they called 911.

Also fortunately, one of two patrolling  Mosier Fire brush engines happened to be a few hundred yards away, en route to investigate another report of smoke which already had an engine and two volunteers in private vehicles tracking it down (this one turned out to be a wild goose chase — see below*).

At the time the fire started, the heavy rain had not yet arrived and there was some potential for the fire to spread out of control.

Thanks to quick action by the homeowners, and thanks to fast, thorough follow-up by Deputy Chief Pete Wright, the fire stayed at about thirty square feet.

*  Mosier residents are asked to try briefly to confirm smoke before calling 911, unless you clearly see flames.  Often during and just after a lightning storm, water vapor will rise from trees and open ground, looking for all get out like smoke.  By observing for a minute or two, you can usually tell the difference:  water vapor (called “water dogs” in the fire service) tends to dissipate into nothing within thirty seconds or so, while smoke — even from a very small fire — generally does not dissipate completely.  If you see what looks like puffs of smoke which come and go and completely disappear in less than half a minute or so, chances are it’s water vapor.  If you see a persistent column rising high into the sky or blowing downwind without completely dissipating, chances are it’s smoke.

Similarly, dust from orchard mowing or road construction tends to settle back to earth eventually, while smoke does not.

By observing for a minute or two before you call 911, you might save us from another wild goose chase.

Your Fire Department is here to respond to any concern about what you think is smoke, and if in doubt after giving it a minute or two, you should call 911.  And certainly if you see flames, call 911 without delay.  But be aware that we spend a fair amount of time chasing down reports of smoke that turn out to be something benign, so please do give it a minute or two if you’re not 100% sure.

Despite about half an inch of rain in the last 24 hours, the burn ban is still in effect until further notice.

No outdoor burning is allowed in the Mosier Fire District, or in lands protected by Oregon Department of Forestry.

The burn ban will be lifted at some point when consistently cool, wet weather has arrived, typically sometime in October.

The end of the burn ban happens when conditions are right, and not on a set date.

Check back here for updates.

Anyone with a burn permit from the Mosier Fire District will automatically receive an email a few days prior to the lifting of the burn ban.

If you live outside the City of Mosier, to request a burn permit and notification of the beginning of open burning, please contact the Fire Chief at mosierfire@gmail.com, or 541-478-3333.  Residents of the City of Mosier need to apply at City Hall, 541-478-3505.  There is no fee.  Permits are good for the calendar year.  For residents outside the City, the permit renews automatically at the end of the year.

This entry was posted in Uncategorized. Bookmark the permalink.